A video-photographic representation of 2008 which aims to make know Africa.

This exhibit buds from the desire to meet the community of Trentino with an African reality, Uganda, where ACAV realizes many projects, and its purpose is to make grow the culture of solidarity, of human rights respect and of cultural diversity.

It displays pictures of population daily life and children drawings showing the reality of their world.

“Under the mango…” the tree, meeting place of the village, from there a slow and, sometimes, invisible process which leads to a new society starts.

The exhibition is available for those who request it, call at +39 0461 935893 and bring in your city, in your village, the images of the million people who live in Africa. 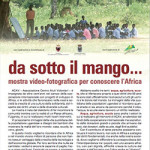 Catalogue of the exhibition “Under the mango tree..” 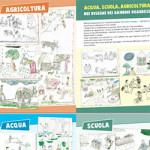 Drawings made by Ugandan children of the exhibition “Under the mango tree..”

Children of the III class of the Crispi elementary school – Trento